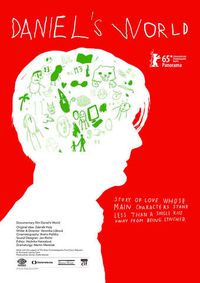 Daniel is a young man. Daniel is a student and a writer. Daniel is also a pedophile. He is in love and keeps no secret about his sexual orientation; not even from the parents of his beloved boy. Daniel has never hurt any child. The film introduces the rises and falls of people living with pedophilia.

In his 1912 novel, Death in Venice, Thomas Mann tells the close contemplation that the character of Gustav Von Aschenbach, a prominent German writer, has about a teenager named Tazio during his vacation trip in Venice. Mann’s book became one of the most beautiful and delicate apologies to pedophilia, the condition that an adult has to be attracted to children of the same or different sex.

Also a writer as the character of Von Aschenbach, Daniel, a young and friendly Czech writer, stars in Daniel’s World The Daily Life of a self-conscious pedophile. Under the direction of Veronika Liscova, the documentary sets out to strip the last taboo of contemporary Western society at the dawn of the 21st century, away from the subtle immersion that Tomas Mann hilarates with his prodigious pen in the context of the beginning of last century.

At the beginning of the film, Daniel has a stark dialogue with his psychiatrist, in which he justifies coping with his sexual orientation through abstinence, an act of conscious sacrifice to sublimate a politically incorrect natural attraction. From here, the conversation as a cinematic resource in the film is used in the narrative to transcend the function of information delivery and to act as a tense device in which physical satisfaction and rational ethics walk together on a tight rope.

A strange meeting of anonymous pedophiles, an interview Daniel has in order to belong to a support group for sexual minorities, and the challenge of raising flags for the recognition of pedophilia in a march of LGBTI groups are some of the situations in the film. Daniel leads each of them armed only with his own words in his struggle to obtain the understanding and the recognition of a society that is prepared to banish him.

The film doesn't show any kind of sexual provocation and it evokes with its worldliness and lightness the powerful solitude established in the spaces inhabited by Daniel in his world of irremediable and elusive love.