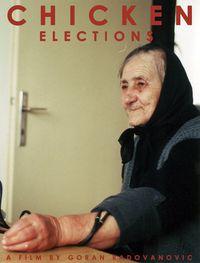 In this hilarious film, an old Serbian peasant woman tries to learn how to operate a used cell phone. Set in a small village in rural Balkans, the documentary questions the relationship between technological development and the deep rhythm of a country.

"Chicken Elections" The absurdity of the development in transition countries

This hilarious film about contemporary society in rural Balkans tells the story of an old Serbian peasant woman who tries to learn how to operate a used mobile phone given to her by her grandson, a local traffic policeman.

Finally, when she somehow learns how to use it, she dies. Thus, this story turns into a metaphor of dying province and the absurdity of the development in transition countries.

Chicken Election is funny, sad and beautifully ironic story about solitude, depopulation, about death before death.