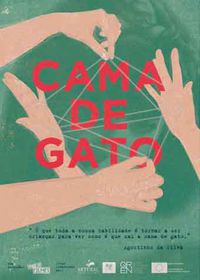 Joana is an energetic and slightly rebellious Portuguese teenager. She is also the young mother of a girl whose father is in jail. Despite all the difficulties and reprimands from her parents, Joana's attitude to life remains playful.

Cat’s cradle, the life of a young woman filmed from the asymmetry

In Cat’s cradle, the fluid scenes of Joana Santos, a slightly rebellious young Portuguese woman, seem to be a permanent provocation to adulthood. At times tender, always playful, sometimes stubborn, Joana’s light-hearted approach to life invites a mise en scène according to a variable temperament.

In this unusual documentary, directors Filipa Reis and Joao Miller Guerrra make the state of inequality a benefit of their film approach. Based on a script by Pedro Pinho, the filmmakers use the imaginary of the visual narrative of fiction films to solve an eternal dilemma in documentary work: how to film the life of someone who really exists.

It is not surprising that a trivial conversation between Joana and her best friend when leaving school is filmed through a careful camera movement that follows them in a traveling shot as they walk down the sidewalk. The camera then mutates in its gravitation when it comes time to register Joan in the privacy of her bed while playing with her little daughter. There is also no doubt when leaving the optical lenses fixed to capture, in the heart of the film, a revealing statement of our protagonist, whose lover pays sentence in prison.

The shape of the film is based on the premise of a problem whose solution does not demand a homogeneous strategy. The great achievement of Cat’s cradle is to enhance the verisimilitude of the life of someone who seems close to us both for her anguish and for her aspirations, all through a cinematographic treatment that is as asymmetric as life itself.