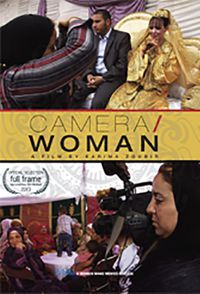 Khadija, an extraordinary wedding videographer and young divorced mother in Morocco, moves back and forth from her conflictual home life to the hopeful, fantasy world of the parties she films, taking us into a world where veils are lifted and no men allowed.

Camera woman, the lens of emancipation

Camera in hand, Khadija, a divorced mother, makes her way through the conservatism of Moroccan society to film what could be a past mirror of herself. At night, she works as a camerawoman filming the weddings celebrated in Casablanca, a ceremony that continues to be a milestone in the tradition of the country as it marks the life of Moroccan women, many of whom must marry against their will.

In this film, directed by Moroccan filmmaker Karima Zouibir, rests a look at the changing role of women in hes country. Every day, more women like Khadija divorce after years of conjugal coexistence, a decision that, despite being liberating, can become a difficult weight to carry due to the controlling conservative opinion, even of those who are close relatives. In this way, Khadija faces the refusal of her family to continue her work as a camerawoman, a job she develops with pride every time she puts her eye behind the lens.

This approach to Khadija´s quotidian life gravitate in a respect that allows to find the pulp of the character between the silences of the “dead” times in the scenes. The contrast between the celebrated hope in the faces of the brides she films and the worldliness of her own domestic solitude seems to reflect a certain fate for the Moroccan woman she herself embodies. A counterpoint that, far from compassionate, frames a female character that sculpts her own emancipation with the curious power of a cinematographic lens.