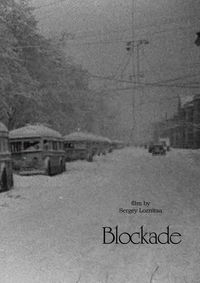 Using black and white film footage of the time, filmmaker Sergei Loznitsa reconstructs the siege of the Nazi army in Leningrad during the Second World War.

Blockade. A reconstruction of the Siege of Leningrad

This film is about life during the siege of Leningrad that was conceding the space for death.

The editing of the chronicle reconstructs the topology of the city and the plot of the war.

This is black smoke, the walls of the city turn into ruins; the city sees through the veil and finds out that the war begins as a deformation of space.

This is white smoke, the camera gets used to the dust and sees the corpses; these are human ruins destined to grow together with space, to become blocks of new walls.