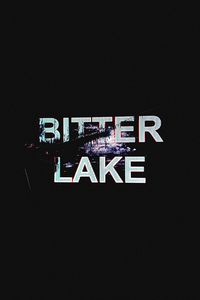 Politicians used to have the confidence to tell us stories that made sense of the chaos of world events. But now there are no big stories and politicians react randomly to every new crisis - leaving us bewildered and disorientated. Bitter Lake is a new, adventurous and epic film by Adam Curtis that explains why the big stories that politicians tell us have become so simplified that we can’t really see the world any longer. The narrative goes all over the world, America, Britain, Russia and Saudi Arabia - but the country at the heart of it is Afghanistan. Because Afghanistan is the place that has confronted our politicians with the terrible truth - that they cannot understand what is going on any longer. The film reveals the forces that over the past thirty years rose up and undermined the confidence of politics to understand the world. And it shows the strange, dark role that Saudi Arabia has played in this.

The world is terrifyingly random and complicated, but it is to the advantage of those in authority to make it seem binary. People can work with “good” and “evil.” Such is the case with Afghanistan, which for nearly a century has been a focal point for such rhetoric. Multiple greater powers have tried and failed to impose their will on the country. In this example Bitter Lake sees in microcosm the entire cycle of the West’s imperialistic hubris refusing to learn from its mistakes.

The film chronicles events in Afghanistan since 1945. Far from a tale of nebulously evil terrorists threatening the freedom-loving world, Bitter Lake shows how a confluence of international influences created the situation in the country as we see it today. No answers are offered as to how it could be improved. None needs to be.

Documentaries are a favored avenue for propaganda because by their very nature, they must simplify complex subjects. Bitter Lake is a paradox — a film arguing for a more nuanced view of the world that nonetheless must reduce many complexities in order to fit a 137-minute runtime. But it is not a substitute for history. It is a defiance of the narrative the West has told about the Middle East for the past century. And in that, the film is a potent jolt.

Director Adam Curtis presents the past and present in one stream. Modern-day footage of Afghan life is intercut with history, strengthening the sense of cause and effect the film argues for. It has a dreamlike, odd atmosphere, often employing snippets of popular music to eerie effect. The doc finds time to pause its argument to watch an American soldier play with a bird. An Afghan rebel rants Death to America for a video camera until he runs out of things to say, then stands around awkwardly. Few people, argues Bitter Lake, really have any idea what’s going on.

Dan Schindel GuideDoc Critic
Home Blog About Us Contact Us