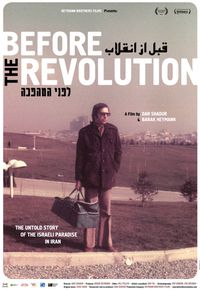 Before 1979, thousands of Israelis lived in Iran with very favorable economic conditions under the protection of the Shah. Through the use of archive material from the 60's and 70's and the testimonies of those involved, this documentary tells how the insurgency of the Iranian revolution changed all their plans.

Before the Revolution, The time of Israelis in an Iranian paradise

Before the revolution that overthrew the dictatorial regime of the Shah of Iran in 1979, a fruitful relationship between the Persian government and the Israeli State enabled thousands of Israeli diplomats and businessmen to find in Iran an oasis of businesses and social privileges.

What today would seem as a dream scenario at a geopolitical level, at that time was justified by historical ethnic tensions between Persians and Arabs and other networks of political power. In Before the Revolution, those who at the time were stripped of their privileges by a fierce revolution reveal all the details about the curious story of the Israelis in the Shah’s Iran.

Between the grain and worn colors of 8mm films, Directors Dan Shadur and Barak Heymann make use of an extensive archive material that immerses us in a time of contrasts. The intimate episodes of wealth, power and luxury are soon left aside by the documents of one social uprisings that changed the panorama of the Middle East completely.