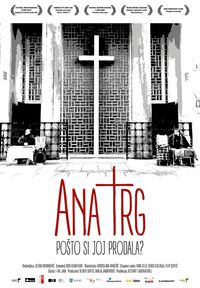 Ana, a seller of religious calendars and rosaries, Zorka, her inmmediate contender, and The Square we they work, are an inseparable trio in this humorous social essay about belonging and friendship.

For already 40 years, without a single day of rest, Ana has been coming in front of the city church to sell the religious calendars and rosaries; in sun, in snow, in rain, on Sundays and holidays.

She is receiving a regular pension and she doesn't belong to the lowest stratum of society, but she has other motives. Only five meters away, Zorka, her immediate competitor, has placed her booth. They apply the business logic of keeping customers in a simple way – by lowering the prices.

Although they are in constant conflict, they can’t manage without each other. Dependence on the dynamic world of constant flow of information, gossip and colorful city characters made them firm symbols of one micro universe.