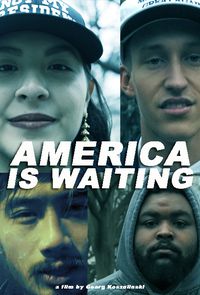 A document about the protesters that filled the streets of Washington D.C. on the day of the inauguration of Donald Trump as president of the United States of America.

America is Waiting. Trump and company in Washington

"Why are you here?" Asks Georg Koszulinski with his camera in hand to several of thousands of protesters who, even from the early morning hours, take to the streets of Washington D.C. to await the inauguration ceremony of Donald Trump as president of the United States of America.

The question is in itself the premise of this document of a historic day on North American soil. In this way, America is Waiting gives voice to those who oppose Trump as their president by occupying the spaces of the capital from where the tycoon will lead the nation for the next four years.

The kaleidoscope of voices is diverse, bringing together people from the LGBTQ community, African-Americans and immigrants, people that do not feel represented by the nationalists ideas of the Republican ex-candidate.

At the same time, this contingent approach by Koszulinski also allows Trump supporters to give their opinion about their leader. They, in the end, are the social phenomenon that propitiated this new era in the country of the "American dream".

Georg Koszulinski Director
Home Blog About Us Contact Us