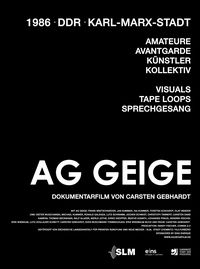 The release in 1986 of Karl-Marx-Stadt meant a musical revolution for their generation. This film documents the short life of this irreverent rock band.

“AG Geige - An Amateur Film” The music of Karl-Marx-Stadt

Founded in 1989, the band ended abruptly in 1993, but still its trail is palpable in the generation that saw it in its glory.

In order to unravel the secrets of the band, director Carsten Gebhardt interviews those who were then protagonists of this musical phenomenon.