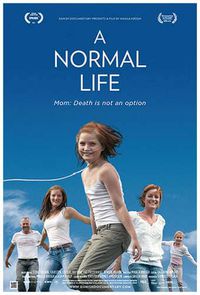 Stine is 37 years old and the single mother of three girls. Her daughter Cecilie, age 11, has cancer and has had it since she was 2. Cecilie has spent half her life in a hospital fighting the disease, with Stine always by her side. Stine is fighting an unfair battle in an unbearable chaos while struggling to maintain some sort of a normal life for her family.

A normal life, the beauty in the forgotten moments

A phrase appears at the bottom the screen. “Soon, I will not be able to kiss you.” Above the subtitle we see Stine, a single mother in her thirties, kissing Cecile, her 10-year-old daughter who suffers from cancer. On the bed there is a suitcase. We understand that there will be another chemotherapy session at the hospital, Cecile’s second home. From there she fights along with her family for the opportunity to keep enjoying the small things of life… a kiss, a word, an image.

A normal life, directed by Danish director Mikala Krogh, finds in the power of the customary moments the energy to tell a silent yet demolishing battle. Only a profoundly white color interior unites two such contrasting spaces: a family house and a hospital room. The film alternates between both spaces following Stine and Cecile during their most important challenge since the little girl was diagnosed with leukemia at the age of two: a bone marrow transplant.

An empty look in a girl´s face inside a hospital room. A discussion between the divorced parents. A mother jogging on the snowy grass. Twin sisters in the beach on a summer day. Without unforgettable events, the film makes us feel the normality of time. The interesting thing about the presence of the camera is that it does not capture moments of grandiloquence. They are beautiful repeatable moments under the watchful cloud of death.

In A normal life, every second that passes is an opportunity to identify ourselves in our own more intense daily struggles.