A Memory In Three Acts 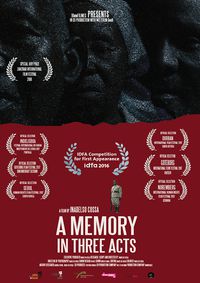 Those who lived first hand the struggle for the independence of Mozambique against the Portuguese colonists during the sixties and seventies open their wounds and lend their voices to tell a story of violence while the specter of postcolonial trauma gravitates everywhere.

A Memory in Three Acts. An essay on colonialism and violence

From a personal point of view, the director Inadelso Cossa revisits the past of the country where he was born, a Mozambique that, back then, was still taking its first steps after having achieved its independence from Portugal in 1975.

Through the testimonies of those who were tortured and who were witnesses of that liberation process during a convulsed era, the film makes us navigate a dark past in the middle of a ghostly atmosphere.

Premiered at the renowned International Documentary Festival Amsterdam (IDFA), this precious essay is a primordial document to understand the wounds of an Africa that fights for its identity autonomy and to overcome the trauma of a past full of foreign owners.