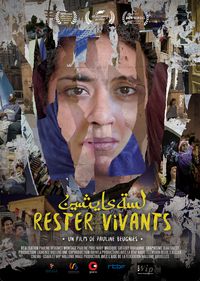 Five years after the Egyptian revolution that overthrew the Mubarak regime, four young Egyptians look back on that event and how it has changed their lives.

A rebel Muslim Sister forced into exile, an activist who discovers maternity and feels muzzled, a laic artist totally devoted to the revolutionary cause and a Coptic Christian who questions opinions he was being dictated since ever.

Still Alive tells the story of four young Egyptians – Eman, Soleyfa, Ammar and Kirilos – from the revolution of January 2011 until the 5th anniversary of the uprising, in January 2016.

Over those five years, their lives have been deeply turned upside down. They have evolved, been through crises, and had to face decisive choices, not necessarily in line with their original ideals.

The four of them take a look at their own past, their own image, and share their feelings about their current situation.