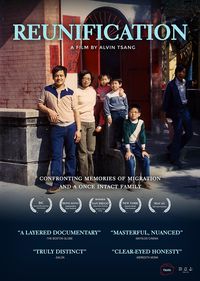 Director Alvin Tsang films the members of his family to put together the puzzle of the reason that led them to migrate from Hong Kong to Los Angeles in the early 1980s.

Reunification. An intimate gaze to my roots in Hong Kong

Filmed over a 17-year period, director Alvin Tsang reflects on his family's migration from Hong Kong to Los Angeles in the early 1980s - fraught with betrayal from his parents' divorce, economic strife and communication meltdown between parents and children.

This poetic exploration moves moodily across different channels and modes, bending into labor histories and Hong Kong's colonial trajectories. Tsang turns the camera on his own family, cautiously prodding for answers, but fully acknowledging that the only closure he can get will be from deciding for himself how to move on.

Alvin Tsang Director
Home Blog About Us Contact Us