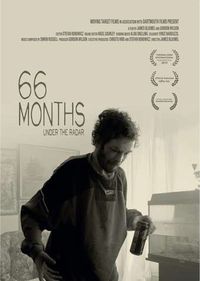 Every year, thousands of people slip through the net of social care provision into a dark, lonely and often dangerous underworld. Nigel is one of those people. Abandoned by those who should have been caring for him, abused and vulnerable Nigel lived under the radar of social services for 66 months. In this hostile environment, Nigel came to rely on Robbie, an alcoholic. Together they lived in poverty in the midst of the dreaming spires of Oxford. And so began their troubling, disturbing but genuinely loving relationship.

After 66 months Nigel was finally picked up by social services and was provided with a secure and safe place to stay. Told from Nigel’s perspective, this film juxtaposes his present experience of institutional life with a series of memories and flashbacks from his time in the ‘wild’. The film was shot over six years and gives an extraordinary insight into a hidden world, made possible only by the close relationship between the filmmakers and contributors. Many difficult questions are raised about abusive relationships, mental illness and society’s duty of care. But this touching and very personal film reaches beyond these to provide an intimate and complex portrait of a dysfunctional relationship in which physical suffering is ultimately preferable to loneliness.

66 Months, the postcards of human eviction

In 1982, Raymond De Pardon marked a milestone in film history by making a portrait of the inherent repression in sanitary institutions filming the seclusion of the patients in the great psychiatric hospital of San Clemente. In 66 Months, we focus on the subject of mental illness in the context of a much more intimate repression, so uncomfortable as hypnotizing. The premise here is diametrically opposed to that of San Clemente: the exile of a vulnerable man by social institutions.

Director James Bluemel films 6 years in the life of Nigel Fletcher, a homeless British man who gets in the company of Robbie Burns, his alcoholic and passionate partner, the protection that the Government Assistance of his country failed to give him. In a point-blank approach, Bluemel gets within the precariousness of the house that the couple share and becomes a witness of an abusive yet endearing coexistence.

The documentary alternates two stages of Nigel’s life. It begins in the security of the place that the British Social Welfare finally offers him in the present, and then it crosses a series of flashbacks back to the world of his time with his lover and, at the same time, his most direct oppressor. During those moments, we witness how Nigel is constantly beaten and harassed by Burns, with whom he also shares moments of immense sincerity and sentimental depth.

66 Months is one of those jewels of discord. It is risky in the ethical sense and deeply provocative in the subject of social responsibility, human vulnerability and love.