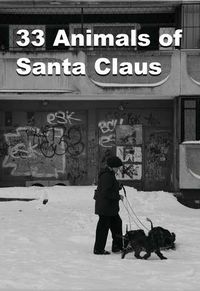 This is a film portrait of a Latvian woman named Santa Claus, who shares her apartment with 33 animals: seven dogs, six cats, two rabbits, one crow, one pigeon, one chinchilla, 10 degu rats, and five fish. It's not the most obvious choice for a way of life, acknowledges the woman in question: "I tell you, it's like living in a madhouse." This cheerful menagerie Santa Claus has created keeps her fully occupied. The animals need to be fed, brushed, kept amused and taken out for exercise in groups.

In this cynical, beaten and violent world is completely normal to expect a film focused on conflict. Tragedy in the form of dramatic twists is what historically has always created the best plots.

Sometimes, is necessary to ignore the rules and dare to break paradigms. And in that sense, 33 Animals of Santa Claus is positively subversive.

Like its title, 33 Animals of Santa Claus is straightforward and simple. This is a brief portrait of a Latvian woman who calls herself Santa Claus, who lives in her small apartment surrounded by 33 animals (seven dogs, six cats, two rabbits, ten degu rats, five fishes, a raven, a dove and a chinchilla) in a snowy environment. In addition to spending time knitting and lovingly tending their animals companions, Livia — her real name — dress up as Santa Claus, walking around the neighborhood handing out treats to the children in exchange for a poem or a song.

Seeing on screen the simple story of a woman with a good heart is disarming. And this documentary, knowing that it doesn’t belong to the conventional standard narrative, doesn’t abuse our time. Under the 50-minute mark, it also plays with the viewer’s cynicism. With a black and white setting and without revealing any detail of the protagonist’s past, it’s on us to trust what we see or, at the contrary, to question her intentions, actions, and even her mental health.

After all, that’s what the myth of Santa Claus is all about.