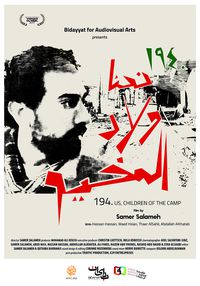 The film takes place in the largest Palestinian refugee camp in Syria. Forced to join the Palestinian Liberation Army, Samer plans to flee the country in search of an environment with more possibilities. While he attempts to do so, he films the reality that surrounds him and isolates him at the same time.

194. Us, children of the camp. The orphan generation of young Palestinians

"I do not think it can get any worse" a Palestinian young man interviewed in this documentary responds to himself to the question of what will the future bring for young Palestinians, inside and outside his territory.

This is the atmosphere of Samer Salameh’s film. He, character and filmmaker at the same time, is a Palestinian young man who lives in the country's largest Palestinian refugee camp in Syria. When he is forced to join the Palestine Liberation Army, Samer plans to cross the border and go somewhere else.

But apparently the all the roads are closed. Meanwhile, the possibility of his "escape" becomes elusive amidst the random images of his most intimate environment and that of the streets where politics and slogans of resistance redound in the minds of a generation that feels orphaned.